I got a chance to get a look at the Acer Iconia Tab W500, 32GB Tablet PC. The W500 runs on the AMD Fusion C-50 APU I have seen. The AMD C-50 has a substantially slower processor and weaker graphics than the AMD Fusion E-350 APU. The main advantage of the C-50 is that it only requires a cooling system capable of dissipating a 9W thermal design point ("TDP"), which is half of what 18W TDP requirement of the E-350.

Despite the cool running nature of the AMD Fusion C-50, we have seen it being placed in laptops like the 11.6-inch Acer Aspire One 722, the Asus 1215B and even larger laptop which could easily cool a AMD Fusion E-350. 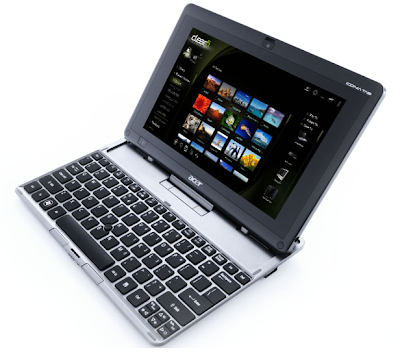 Unfortunately, the AcerIconiaW500 is a Windows 7 Tablet. I am sure you are asking what is wrong with that?

Balance. Because it is a tablet, the processor, memory, storage and battery are all found in the "lid" making it top heavy when used together with the keyboard.

Awkward carry. Unlike the Asus Eee Pad Transformer which effectively works like a laptop when you plug the tablet into the keyboard, Acer Iconia Tab W500 does not. You cannot fold the "lid" over the keyboard. Instead all you can do is to detach the keyboard. 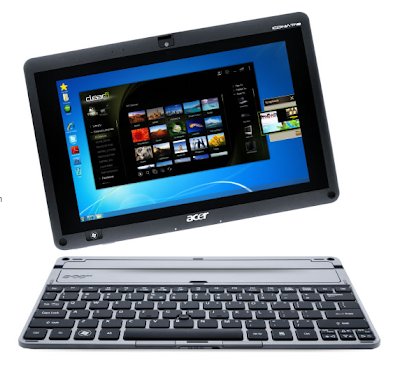 This means when carrying around the tablet and the keyboard, they have to be carried around as two separate pieces.

Using this technology to create the W500, Acer could have made a really nice 11.6-inch ultraportable laptop, instead Acer made a 10.1-inch Windows 7 tablet with a keyboard which just does not feel well thought out.