The Android 3.1 Honeycomb Lenovo ThinkPad Tablet is now available for sale abroad. I hope this hits Philippine shores. It is the productivity tablet done right. The ThinkPad Tablet has a 1280 x 800 multitouch display, 1GB of memory, front- and rear-facing cameras and a NVIDIA Tegra 2 dual core processor, full sized USB ports and SD card slot. The 16GB model is priced at $499, a 32GB version a 32GB version for $569 and a 64GB option for $669. Basic specs and price-wise, the ThinkPad Tablet is on par with the Apple iPad 2 and its Android competition. Most Android tablets which match iPad pricing do not fare very well, and while the ThinkPad Tablet is targeting a more limited market, I think it will do very well in its target market. 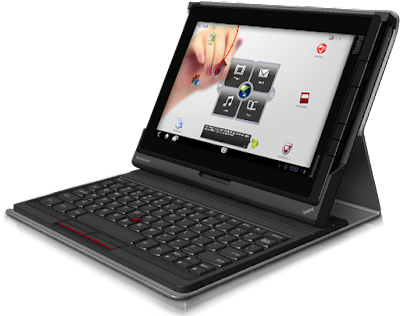 Like the Asus Eee Pad Transformer, the ThinkPad Tablet has a detachable keyboard. When not in use the tablet can fold over the keyboard so it can be carried around just like a laptop. You can attach a physical keyboard to the iPad too, but this is designed more like a desktop keyboard and is not as handy to carry around. So if you want a Tablet which can double as a laptop, the Transformer, which has been selling well, and the ThinkPad Tablet are your best bets, 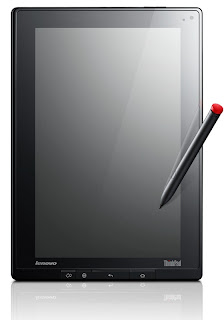 If you are looking for a tablet, which can also replace your laptop this is the one. The Lenovo ThinkPad Tablet will not challenge the iPad 2 in sales, and is not designed to be an iPad 2 killer. But for the mobile professional, this looks like the best tablet in the market.