SMART Communications is about to release it's Netphone announced in Barcelona, Spains last February, and with it a new set of plans designed around the new phone. 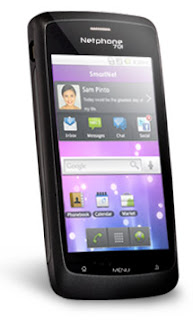 It is being offered on SMART's regular postpaid plans, being offered free at Data Lite Plan 800 with a two year contract. Where the SMART Netphone package really shines is in the prepaid department.

First, the SMART Netphone is being offered for prepaid plans at a price of Php9,900. This pretty much makes it the value for money Smartphone being offered in the market today.

Second, the more interesting thing about the SMART Netphone are the new plans being offered with this phone. For Php999 you get unlimited access to your social networks via Social Stream and unlimited chat through Netphone Messenger and a chat service of your choosing (YM, FB Chat), 1GB of Data for surfing, and 200 minutes of calls and 3500 texts to SMART subscribers. Not bad at all for Php999.
They also offer similarly low priced daily plans for as low as Php10 per day (click on the image for details).

What we cannot say much about are the new services offered with the phone. The phone has its own proprietary messenger and social networking apps, with a global directory which stores your phonebook online under the SmartNet brand. SmartNet looks like SMART is creating a online community. There could be some privacy issues here, but we will have to wait and see.

While we are all interested in the new iPhone and Android Ice Cream phones to be released, the SMART Netphone looks like the most significant release for the Philippine market. A smartphone with an affordable service making it really smart.
Posted by Unknown at 9:09 AM