The HTC ChaCha is a Google Android phone which ships Android 2.3 out of the box. It is a QWERTY messenger phone which combines a physical keyboard with a touchscreen. The display is a small 2.6-inch which has a high 480 x 320 resolution for a screen of this size, so fonts and images on the screen appear very sharp. 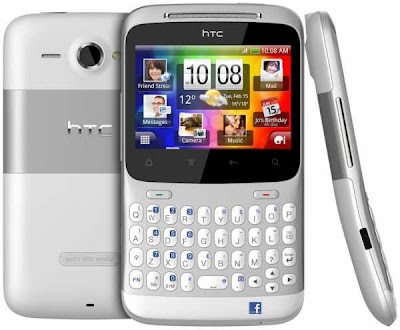 QWERTY messenger form factor. If you are considering this type of phone, that is really the first issue you must resolve. Are you willing to give up screen real estate for a physical QWERT keyboard. Having shifted from a phone with a physical QWERTY keyboard six months ago, I have pretty much concluded that I will never be able to type as fast on a pure touchscreen phone as against one with a good old physical QWERTY keyboard.
If your main purpose for a phone is calls, SMS, email, instant and social networking, this may be the best choice for you. If web browsing, ebook and document reading, photo editing and playing games is a main concern you are probably better off with a pure touchscreen phone with a larger (at least 3.2 inch) screen. Put simply, Angry Birds wont be as much fun on a 2.6-inch screen.
Hardware. The HTC ChaCha is nicely built with a metal bofy. The phone has a Arm v6 800MHz processor, 512MB of RAM and 512MB of ROM. The phone comes with a 2GB MicroSD card, and storage is expandable to 32GB. The hardware is more than sufficient for those who want a phone for voice calls, email and messaging and social networking. Arm v6, means it has limited rather than full flash support in the browser, and as we said earlier it is not really a good gaming platform. "Power users" would be better off looking elsewhere.
The phone has a 5MP auto focus primary camera with a LED flash and secondary VGA camera for voice chat and the like. The camera is decent but nothing to get excited about. Other phone with 5MP cameras, like the Samsung Galaxy Ace and the HTC Wildfire S snap better pictures.
Facebook button. The HTC ChaCha has plenty of character with the trademark Android chin distinguishing from the typical QWERTY phone and a dedicated Facebook button to launch the phone Facebook app on the chin. This is a nice phone from the standpoint of build quality, but no matter what you do, the first thing people will notice if the blue "F" on the body. It tells a lot about the user.
Similar phones. The HTC ChaCha can be found at a price of Php13,500 which puts it in the same price range as other  QWERTY messenger phones like the BlackBerry Curve 3G and is substantially cheaper than Nokia E6. Among these three options the HTC ChaCha is a much better choice than the E6. Hardware wise, it is a better choice than the Curve 3G. The Curve 3G would only be a better choice if you plan to avail of BlackBerry Internet, Messaging or Social Services.
Samsung also has its Galaxy Pro B7510 with similar specifications to the ChaCha and can be found at about 2K lower. The Galaxy Pro B7510 has a lower resolution screen, and its plastic case is less impressive than the HTC ChaCha. Basically, the Galaxy Pro B7510 is cheaper, but the HTC ChaCha is the better build phone. The Facebook button is just another "plus".
If you do want a QWERTY messenger phone, I think this would be the best choice for most users.


Acquisition options. Despite being a nicely build phone the HTC ChaCha is probably going to be a hard sell at its Php13,500. It is not the phone itself, it is QWERTY messengers in general. Most buyers will find the 3.2-inch pure touchscreen form factor of the HTC Wildfire or the 3.5-inch Samsung Galaxy Ace more appealing at this price range.

The HTC ChaCha becomes a really good deal on a postpaid line. SMART Communications is offering this phone free at Data Plan 1000, which gives you 100MB of data, 40 minutes and 100 SMS to all networks. The Wildfire S is offered at Unlimited Data Plan 1500 while the Galaxy Ace is offered by two carries at Plan 1800.

If SMART's Data Plan 1000 fits your need, this becomes a very inexpensive and stylish option for keeping connection to your social networks.
Posted by Unknown at 1:26 PM