Around the web: Mobile phones 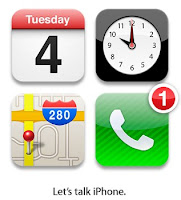 iPhone 4S &5. PCMagazine reports that the invitations have been sent out, Apple invites the tech elite to "Let's talk iPhone" to be held on October 4, 2011 (US time). Exactly what it coming out is speculative. Pictures of Otterbox iPhone 4S cases which leaked on the net would seem to indicate that there will be an iPhone 4S, which is similar in appearance to the current iPhone 4. Leaked pictures of a Casemate case seen to indicate something completely new. Basically, I am expecting two phones to be announced, an iPhone 4S and iPhone 5.

We also do know that the new iPhone will be getting iOS 5 and the commands (hence the "Lets talk" thing).

Windows Phone 7 Mango. TechRadar reports that Windows Phone 7.5, a.k.a Mango, is officially out. While we did see the new HTC Titan and Radar and a new Samsung W phone this month, there was much less fanfare than expected. With the new iPhone coming out in a few days, Windows Phone 7 will soon be forgotten. I cannot help but feel that Microsoft missed a critical marketing Window and Nokia is moving too slow.

Android Ice Cream Sandwich. While there is not word of the exact date of the release of Google's Android 4.0, another Ice Cream Sandwich phone has been announced, the Samsung Galaxy S II HD. The Galaxy S II HD boast a 4.65-inch 720 x 1280 Super AMOLED display, a dual core 1.5GHz processor and LTE connectivity.
Posted by Unknown at 7:51 AM