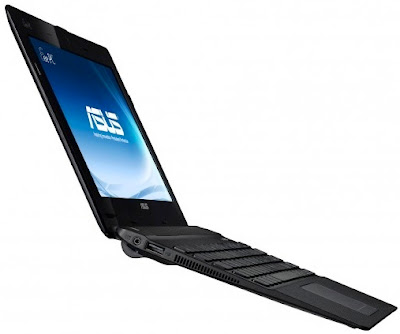 Poor mans MacBook Air? Lets start with what will make you consider buying this netbook. The Asus Eee PC X101 weighs in at 2 pounds while  the  X101H weight in a 2.2 pounds. Both netbooks very handy having a width of just of 10.3 inches, a depth of 7.1 inches, which is the size of your typical 10-inch netbook. The PC X101 is  a MacBook Air like 0.69 inches thick, while the X101H is a thicker, but still a slim 0.89 inches.

Storage distinguishes the X101 from X101H. The main difference between the X101 and the X101H, is storage. The X101 has a 16GB SSD drive and a MicroSD card reader. This will allow you to expand storage to up to 48GB. The X101H comes with either a 250GB or 320GB hard drive. We understand the Philippine version will come with a 250GB hard drive.

Netbook genes. The Asus Eee PC X101 has the typical netbook 10.1-inch 1024 x 600 resolution screen. Inside you will find, an Intel Atom N435 or N455 processor and 1GB of RAM. The Philippine version will have the faster N455 version. I really have no strong preference between these two processors, the N455 is a bit faster, the N435 is a bit more energy efficient and runs a bit cooler. Given a choice between the two, I would probably choose the slower but more energy efficient N435.

Given the modest specifications, you should have reasonable expectations of what these netbooks can do. They are more than sufficient for web browsing, typing documents, preparing spreadsheets and presentations and managing your social networking.

I would not try to do any 3D gaming with these machines, or serious photo editing. The modest specifications also mean the these laptops cannot seamlessly play HD (720p or 1080p) video. Basically, it is a not a good multimedia platform.

These netbooks come with small 3-cell batteries. Asus rates them at 4 hours or battery life. But while web browsing on WiFi I would expect a little under 3 hours. This is probably the biggest drawback of these netbooks.

MeeGo inside. While a Windows version of the X101H is available for a higher price, the current models being has the Linux based MeeGo operating system installed. While the mention of Linux normally scares most buyers, and netbooks which originally ran Linux operating systems quickly coverted to Windows three years ago, I think MeeGo acceptance will be easier today.

I think with many users now having gotten used to non-Windows operating systems and applications in their smartphones, so they wont feel lost with a laptop that does not run Windows. While you can install Windows on the X101H I recommend you give MeeGo a try. This operating system has much lower system requirements than Windows 7, is designed to work in smaller screens and will run faster than Windows. With OpenOffice installed, which is compatible with Microsoft Office formats and dedicated Facebook and Twitter apps, it is good to go out of the box.

Wing design. Whether you like these laptops or not, I suspect most would give a approving nod to the new "Wing" design which will replace the Sea Shell design Asus has been using in their 10.1-inch and 12.1-inch netbooks and laptops. A 12.1-inch AMD Fusion (HD capable and HDMI packing) powered versions of these netbooks with a larger battery would really be interesting.


Should you buy one? I think these are nice alternatives to a tablet. First they are half the price of a tablet. Second, since they have physical keyboards, they are a better choice for people who type a lot.

When my current Linux box dies (it is a 4 year old HP Compaq 6510b - a real workhorse) I will probably get one of these things and use it as my Linux machine.
Posted by Unknown at 11:21 PM