The best mid level smartphones today have never been more inviting. How much for a "mid-level" device today, about Php17,000. For this money you get a phone with a 3.7 to 4-inch screen high resolution screen, a 1GHz processor a 5MP camera and the ability to capture 720p video.

Looking for a higher end device? Follow this link.

LG Optimus Black P970. My favorite option in this category is the LG Optimus Black P970. The phone has a large 4-inch screen but its 64mm wide 9.2 mm thick case which weights only 109 grams feels really good in the hand. The razor thin profile also makes the phone look more expensive than it is.

The screen is excellent, the 700-nit bright IPS display offers great visibility even under broad day light. The other specifications are what you expect for a phone of this class with a 1 GHz Cortex-A8 processor and PowerVR SGX530 graphics, 512MB of RAM, 2GB of internal storage, a 5MP autofucos camera with a LED flash and a 2MP secondary camera.

Also available at this price range are the HTC Desire and Samsung Galaxy SL. The HTC Desire, an excellent phone in 2010, only has 512MB of internal storage, and even HTC is having a hard time fitting their latest updated in this phone and lacks a front camera.

It is close, but I prefer the LG Optimus Black mainly because of the screen.

If you are willing to spend a bit more, Samsung's 2010 flaship, the Samsung i9000 Galaxy S would be considered by many as a better choice. It has a 4-inch Super AMOLED display which many consider the best display on a smartphone and is at least a match to the 700-nit display of the LG Optimus Black, has faster graphics with a SGX540 GPU and tons of internal storage at 16GB. The only real chink in the armor of Samsung Galaxy S is it does not have a flash for its camera.

It is probably the top choice, but I will qualify my recommendation. It is available for as low as Php19,000, but finding one these days is not that easy. So depending on where you are located in the Philippines, it may or may not be a viable option. 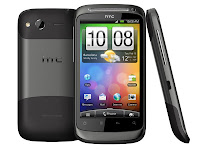 Postpaid - HTC Desire S. If you are looking to get a phone free with a plan, SMART Communications is offering the HTC Desire S at plan 2000. The HTC Desire S has a high resolution a 3.7-inch display, 768 MB of RAM, 1.1GB of internal storage (with a 8GB MicroSD card as part of the package), a 5MP primary camera with a a LED flash and a front camera all wrapped up in a nice aluminum case. The only real spoiler in the package is the Php20,000+ price. On the other hand, if you plan to get one on a post paid plan, it is free a SMART's Data Plan 2000.