Windows Phone 7 Mango phones designed to challenge Apple's and Google Android best offerings are coming out into the market to make what we think will be its the first part, of a two part, final push at becoming one of the major operating systems.

In the 4th quarter of this year we expect to see Windows Phone 7 Mango take a stab the iPhone at the high end Android devices and in the 1st quarter of 2010, to try to wrest the mid and entry level markets from Android with Windows Phone 7 "Tango".

I love the Metro UI and how tightly it integrates smartphone functions, but the HTC Titan announcement is both impressive and disappointing. 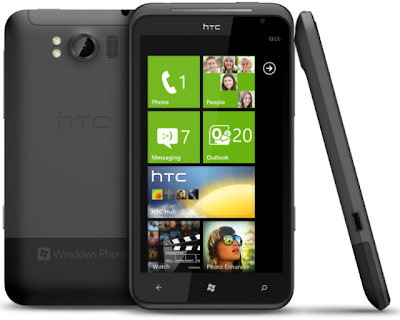 HTC Titan. HTC has had a long relationship with Microsoft, and in 2010 they put the most support behind Windows Phone 7 launching a large number of Windows Phone 7 devices with the best technology HTC has on hand. For the Mango launch HTC is doing the same thing.

The Titan impresses. HTC has blessed the Titan with a giant 4.7-inch S-LCD display in a case which is a lot smaller than you would expect for a phone this size. While the phone is 70.7 mm wide it is only 9.9 mm thick, which makes it just about as handy as 4.3-inch HTC Desire HD from 2010. While the HTC Titan is 2.7 mm wider, it is 1.9 mm thinner. A marvelous feat of engineering.

HTC has given the it's Titan 16GB or internal storage, its Dolby Mobile and SRS sound enhancement for audio and an 8 megapixel camera with 28mm lens, back-illuminated sensor, F2.2 aperture and a dual-LED flash, which is the best still camera HTC has placed on a phone. HTC has also given it Titan a high capacity 1600 mAh battery.

All this is wrapped around a unibody aluminum case. HTC has dressed up Windows Phone Mango as it best can.

If the phone had a qHD resolution (540 x 960) like it has on the Google Androdi powered HTC Sensation it would be narrower and slimmer than the HTC Desire HD. That would have been an amazing feat indeed. The qHD screen would be a better choice for HD video playback.

While HTC did not explain the choice for 480 x 800 screen resolution, that appears to be a limitation of Windows Phone 7 Mango.

Instead of the dual core processors we see on flagship Android Phones, you get a single 1.5 GHz Scorpion processor. Instead of the Adreno 220 graphics on the top of the line HTC Androids you get Adreno 205 graphics. Windows Phone 7 does not appear support dual core processors at the present time, since the information we have on Windows Phone 7.5 (Mango) says that it added Qualcomm MSM7X30 and MSM8X55 support, but makes no mention of MSM*X60 support, this would explain the single core  single core processor and the Adreno 205 graphics.

This also means that the HTC Titan does not support 1080p video. While the average buyer may not care about whether the phone has a single of dual core processors, the absence of 1080p video will make the phone seem inferior to the latest Android gadgets in the average consumers mind.

It looks like HTC tried to put its best foot forward with the Titan. Since Windows Phone 7 does not support or require a dual core processor, there should be no problem as this phone will support every Windows Phone 7 app in the foreseeable future. But it is starting to look like Windows Phone 7 Mango is a step behind Google Android and iOS in the 3D graphics and video department.

I am not sure if this will be enough to put up a serious fight against the next iPhone and the upcoming Google Nexus Prime phone. But lets wait and see how much this phone will cost. The less than cutting aspects of some of its hardware might yield a nice "discount" on the price. Overall it is still one impressive piece of hardware and Mango's other features are very impressive. Whatever the price, I am giving this phone a good look if and when it gets here. For me, HTC put in enough goodies so I can overlook the shortcomings. I don't think the rest of the market will though.

The HTC Titan should be available in Europe by October.