Users who have never tried Linux might be surprised how wrong their impressions are of what using Linux is like. I think Ubuntu Linux is probably the best entry into the Linux world for the non-Linux user.
When you boot into Ubuntu Linux, you are greeted by a nice familiar interface. It is different from the Windows or Mac desktops, but the elements are familiar. On the left side of the screen you have a launcher where you can pin your most frequently used applications.  One click launches the app.

Ubuntu decided to put the launcher on the left side to maximize the vertical area available for applications. With laptop screens now following HD 16:9, modern laptops have more horizontal space and less vertical space, this decision makes sense. Still the launcher hides when you launch, leaving only the top bar so it does not necessarily have to be on the left side.


That it the entire point of the Unity interface I think. Maximizing desktop space. 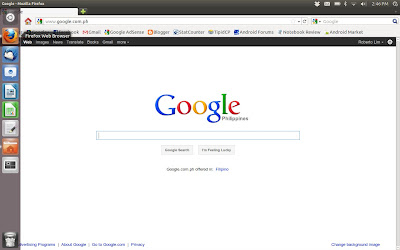 Moving your mouse to the left edge of the screen brings back the launcher. Well, that's all for now. Take a look at Application and System indicators by following this link.
Posted by Unknown at 2:52 PM