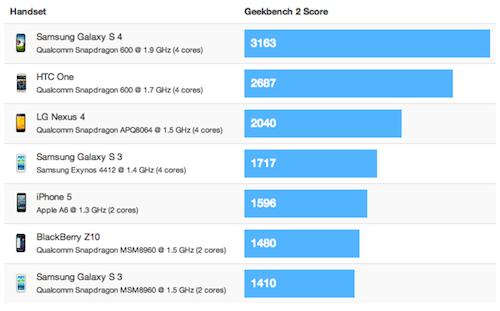 But that it not really news. The Apple iPhone 5 was built around 2012 technology and is really more of a competitor to the Samsung Galaxy S III and HTC One X.

What is more interesting is how much progress is being made with each generation of smartphone chipsets in terms of power (higher is better).

In four years times, smartphone power has multiplied by a factor of 10. The Qualcomm S600 in the Samsung Galaxy S 4 have as much power as Intel Core 2 Processor Duo processors released in 2008 and 2009! Now that is pretty amazing.