As far as tablets are concerned I have prefer the smaller 5-inch to 7-inch tablets. As impressive as the Apple iPad's build quality and interface is, I just feel like it is a bit too big and a bit too heavy for a handheld device. I saw a 5-inch Dell Streak at the Globe Telecom Hub at ATC, and that caught my interest.
Dell Streak is actually classified as a smartphone. It has a 5-inch 480 x 800 screen covered by the near scratch proof Gorilla Glass. It is powered by a 1GHz Qualcomm Snapdragon processor and 512MB of RAM. Internal storage is 16GB, expandable to up to 48GB via a SD Card slot. For connectivity, you have Bluetooth, WiFi and 3G. Small, handy and weighing in at less than half a pound, it could be my ideal tablet.
After doing some inquiries, I found out that it is for sale in the Philippines, but the prices are near Php40K. Yikes! That is the same price as the Apple iPad with 64GB of memory. In either case, much more than I would be willing to pay for a tablet. 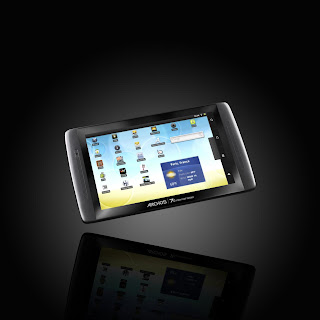 Browsing the web, I found that Yugatech unboxed a Archos 70 Internet Tablet. The Archos A70 has a 7-inch  display with 800×480 pixel capacitive screen. Inside is a 1GHz ARM Cortex A8 CPU. You have two options for storage, either  8GB Flash memory expandable via a MicroSD card or 250GB HDD model. The flash memory model weighs in a 0.66 pounds and is 0.44 inches thick, while the model with the hard drive weighs in at 0.9 pounds and is a bit thicker at 0.55 inches. At 7.91 x 4.49 x 0.43 inches  and at two-thirds of a pound, the 8GB Flash drive model would be handy enough.
The pricing is reasonable. With 8GB of Flash memory the price is Php15,490 and Php16,990 with the  250GB hard drive. However, connectivity is its sore spot, you have WiFi and Bluetooth but no 3G. It does have a USB port so you might be able to plug in a USB dongle if you can get a compatible driver.
Older reviews of these tablets are no longer applicable as the newer Archos Tablets have faster processors and more responsive screens. Unfortunately, I could not find a review of the 7-inch. Laptop Magazine recently reviewed the  bigger brother of the Archos 70 Internet Tablet, the Archos 101 Internet Tablet which has the same 1GHz processor and the same 8GB Flash memory. They found performance to be a bit sluggish and multi-touch a bit dodgy, but battery life was as promised at 10 hours.
I like the size and the price, but the absence of 3G and so so review at Laptop Magazine leaves me sitting on the fence with this one. Lets see what Abe Olandres says when he reviews the unit.
Posted by Unknown at 8:30 PM