The 7-inch Apple iPad rumors do not seem to die. Steve Jobs has explained as to why Apple wont be releasing a 7-inch iPad. "Apple has done extensive user testing and we really understand this stuff," he said. "There are clear limits on how close you can place things on a touchscreen, which is why we think 10 inch is the minimum screen size to create great tablet apps." x x x "One naturally thinks that a 7-inch screen would offer 70 percent of the benefits of a 10-inch screen...this is far from the truth. Seven-inch screens are 45 percent as large as an iPad," Jobs said. "This size isn't sufficient for making great tablet apps." In sum, Jobs declared that  7-inch tablets would be "dead on arrival". 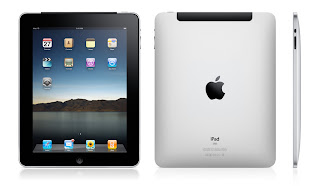 The argument that a 7-inch iPad would be too small is obviously flawed, Apple's own 3.5-inch iPhone would be proof of this. The reality is that creating both a 10-inch (actually 9.7-inch) and a 7-inch version would create difficulties for any company. The real problem, as Job's correctly explained, is that a 7-inch tablet would have a screen half the size of a 10-inch tablet. While a program created for one would run on the other as you could even keep the same 1024 x 768 screen resolution for both tablets, the buttons, icons, fields and other elements would be half the size.
After having used both the iPad and the Samsung Galaxy Tab, I have to say, I am a bit confused about exactly how you use one. Considering how well it has sold, I guess most people do not share the same opinion. A 9.6-inch tall and 7.5-inch wide tablet feels just a bit too big for me to want to carry around in one hand for a long period of time. It seems more like something I would like to lay down on a table or place on my lap.
I really did like the smaller size of the Samsung Galaxy Tab, which is a product I am reluctant to purchase because there comes the question of whether or not it will get long term support. Google has announced that its Tablet OS will be Android 3.0. Early adoption of an Android tablet may mean that it might not be able to run Android Tablet Apps once they are out, leaving you running apps designed for a mobile phone on your Samsung Galaxy Tab. There are reports that the Samsung Galaxy Tab will get a Honeycomb update.
I suppose I am not the only one who would like a smaller tablet and Apple would be making a mistake to ignore this market. Maybe an 8-inch tablet might not be considered to be "dead on arrival" by Apple's guru? Samsung might make an official announcement on Honeycomb support for its tablet. If not there, will be a whole slew of 7-inch tablet to choose from in a few months time.