For some reason, the Asus Philippines decided not to bring in the Asus Eee PC 1215N into the country and instead just brought in its sibling, the Asus Eee PC 1215T. There has been a strong interest in this model, especially with the local enthusiast community. In part because of this, a local laptop seller, PC Corner decided to import that into the Philippines, and is not offering the Asus 1215N at Php27,995 without an operating system. 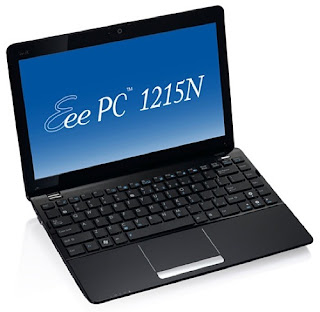 The Asus 1215N is a 12.1" *1366 x 768) laptop powered by an 1.8GHz Intel Dual Core Atom D525 processor and Nvidia's Ion 2 graphics with benefit of Nvidia Optimus Technology, which switches automatically between the more powerful Ion chip and a low power Intel GMA 3150 Graphics Processing Unit (GPU) as the need demands. The Atom D525 processor scores 725 points in the PassMark - CPU Mark Benchmark which is almost 30% faster than the dual core Atom N550 found on the latest netbooks.

The real interest in this netbook it the graphics chip. Laptopmag's benchmarks showed that the Nvidia Ion 2 card scores 2,692 points, ten times as powerful as the Intel GMA 3150 GPU found on most netbooks. The Nvidia Ion 2 is twice as fast ATI 4225 GPU found in the AMD netbooks. Starcraft 2 is actually playable in this machine. Despite the Atom processor and the Eee PC branding, the Asus Eee PC 1215N is another one of those machines that stradle the line between netbook and ultraportable. Battery life is a decent, 5-6 hours.

There is one point of concern, the Php27,995 price is without an operating system. In order to get the benefit of Nvidia Optimus Technology you have to install Windows Home Premium or better. This would bring up the price to Php32,990. Laptopmag called the Asus 1215N "the best 12-inch notebook you can get under $500." Abroad Asus 1215N has a retail price of US$499 with Windows Home Premium installed. In the Philippines, the Php32,990  puts it at the same price as our favorite value ultraportable Intel Core i3 powered Acer Aspire TimelineX 1830T, which has a suggested retail price of US$599, and sells for Php28,500 to Php32,500.

Email ThisBlogThis!Share to TwitterShare to FacebookShare to Pinterest
Labels: Netbooks, Ultraportables (under 4lbs.)