I am not sold on tablets. Maybe it is because I am older or something, by my ideal portable computer is a small laptop. Something in the area of 11.6-inch and 3 pounds is cool. Something with a 13.3-inch screen and weighing in at 3 pounds is perfect (think Sony Vaio Z and MacBook Air). While waiting for my friends to arrive for our Friday night gathering I happened to pass by a Globe Business center. Globe Telecom had a functional Samsung Galaxy tablets on display. Now this is just a big Samsung i9000 Galaxy S, so basically there is nothing really new about it, and it works well. 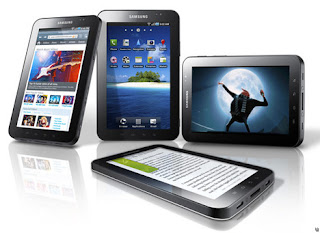 I picked up the demo unit and tried to type in a memo holding the Samsung i9000 Galaxy S horizontally (landscape to most of you), and tried thumb typing with it, like one would do with a Blackberry. Just a little to big. I can thumb type with it, but it does get a bit difficult trying to reach the T-Y-G-H-B keys. A 5.5 inch unit might be perfect. While it seemed awkward to do so, I held it vertically (portrait in PC speak) and tried thumb typing. I had no problem reaching all the keys and surprisingly the thing was balanced in my hands. I can imagine that holding it this way for long periods could be rather tiring, but it felt light enough to use this way. And at least you can thumb type on this one. Sometimes smaller is better. In the case of tablets, 7 inches may be the sweet spot for this kind of device.
I inquired about the price or plans at which Globe would be offering the Samsung P1000 Galaxy Tab. The friendly customer service representative informed the Globe Telecom was not be offering the Samsung P1000 Galaxy Tab but only the micro SIM for 3G connectivity. Abenson had one for sale at Php37K, at 12 months zero interest, with payment deferred tile May 2011.. You can probably find it for sale at Php34K on a cash basis elsewhere.

At a Php34-37K retail price it is priced higher than the current selling price of the Apple Ipad 16GB Wifi + 3G, which has the specifications similar the Samsung Galaxy Tab. It is priced roughly Php10K higher than the entry level Apple Ipad 16GB, which has WiFi but no 3G connectivity. Basically, the Samsung Galaxy Tab
Walking away from the demo unit lugging my 3 pound laptop in a backpack (I suffer from big bag syndrome) a 7-inch tablet is so light and handy, it might be nice to have one to lug around when I do not want to carry my ultraportable around (we have really grown lazy since we had to stop hunting for food). Exactly, what I would do with it, I really do not know, but the Samsung Galaxy Tab is so cool.
The specifications of the Samsung P1000 Galaxy Tab are as follows:
Posted by Unknown at 12:52 AM