RIM's Playbook: Fumble or First Down

I have been pre-occupied with mobile phones lately. I came across this rather thought provoking editorial at Engadget: RIM seems to be as lost as my BlackBerry.

-- but it wasn't until I saw Lazaridis speak a day later that I saw the writing on the wall for me and the company: RIM doesn't have a competitive smartphone now, nor will it have one any time in the near future.

It's a good read, with some eye-popping insight into future what, until recently, was the worlds leading manufacturer of smartphones. So the BlackBerry is doomed?

It's confusing -- RIM seems to be creating its own mobile class system of smartphone serfs and tablet nobles, if you will. Phones with an outdated OS have been given slight sprinkles of modern day functionality while the PlayBook receives fresh, multicore software with an innovative UI and apparently great performance.

This confusing "mobile class system" actually makes sense to me. I have be torn about the desire to maintain the traditional QWERTY messenger and a modern touchscreen. A solution could be an Android phone with a slider keyboard, like the HTC Desire Z. But that is a 180 gram brick, even heavier than the monster  4.3-inch HTC Desire HD (164 grams) and much heavier than, say a BlackBerry Curve 9300 (104 grams). Even RIM'S QWERTY slider, the BlackyBerry Torch 9800 weighs in at hefty 161 grams. There is also the issue of "balance", last year when I got a Nokia E75 from Smart Communications, which only weighs in at just 139 grams, I decided to trade it in for a Samsung B7320 Omnia Pro, a traditional QWERTY messenger.
The BlackBerry solution seems to suggest not to insist on one tool to do the job. 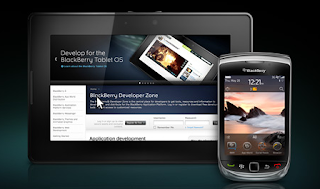 QWERTY + Playbook. The BlackBerry PlayBook is tablet which is set to be introduced by RIM in February 2011. It has a 7-inch 1024 x 600 pixel resolution touchscreen, a 5 megapixel camera on the back, 3 megapixel camera on the front, a dual-core 1 GHz processor, 1 GB of RAM, and a new multitasking operating system based on QNX. For such a high end tablet, it lack one thing, the Playbook, does not have 3G connectivity. It relies a BlackBerry phone for 3G connectivity.
And this actually makes sense. Once I have a unlimited data plan for my phone why would I want the expense of paying for a second unlimited date plan for the tablet. An this appears to be the BlackBerry solution to the Apple iPhone, the Google Nexus S and the entire army Android army of super smartphones: Get both a smartphone and a tablet.

An article at ConceivablyTech reports that "Market researchers from Gartner believe that tablets like the iPad may not distract the consumer’s attention from entry-level and small form-factor notebooks. Instead, Gartner believes that consumers who purchase a tablet are generally unlikely to buy a high-end smartphone."


Sure, you could get an iPhone or Android touchscreen and a tablet, but they would actually duplicate each others functionality too much. Imagine owning both a Samsung i9000 Galaxy S and a Samsung Galaxy Tab? On the other hand a BlackBerry Bold or Curve with a BlackBerry Playbook seems like a nice complementary team. Maybe BlackBerry has read the Market right.


The more basic smartphone plus medium sized tablet duo, is a solution I am very willing to accept.