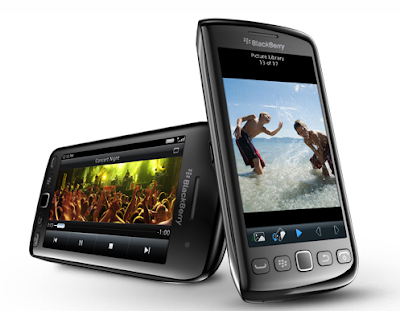 RIM has announced three new BlackBerry's running their BlackBerry OS 7. We will have to wait for the reviews to see how good this O.S. is. For now, we can look at the hardware specifications.
The new BlackBerry Torch 9810 is very interesting. I looked at the Torch for a bit earlier this year, and considered buying it. Its 360 x 480 pixel resolution screen looked sharp enough, 3.2 inches was a bit on the small side, and the web browser disappointing. All in all, not enough for me to pay nearly 30K back than.
I do have a bias, I never really like slider phones. I passed on the Torch in the same way I passed on the HTC Desire Z. Slider phones tend to be heavy the Torch weigh as much as the HTC's 4.3-inch monster phones, and the Desire Z is even heavier.
While I love the physical keyboard on both units, after a friend let my play with his iPhone 4 for an extended period, I figured I could get along with the virtual keyboard. Five months on no regrets. I can still type faster with a physical keyboard, but intelligent word prediction gets me by.
The BlackBerry Storm appeared to be dead... so I was left with Android, iOS, or Windows Phone 7
RIM has announced a new Torch, a new Bold and a new STORM. Well not really, the touchscreen only BlackBerry goes under the "Torch" name too. With a 3.7-inch screen 480 x 800 screen. I know it is a little too little a little too late. I know that BlackBerry 7 OS is a placeholder till QNX, but...

I think I want one.  I really do not need all that many apps, and BlackBerry's push email is still better than what Android, iOS and Windows Phone 7 have to offer.
So what do you all think? Am I nuts?
Posted by Unknown at 5:56 PM