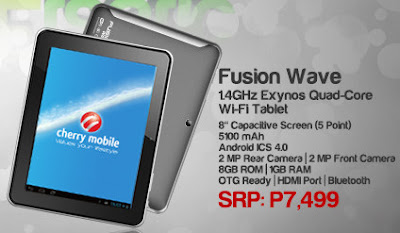 Cherry Mobile latest tablet is the Fusion Wave. The Fusion Wave is an 8-inch Android Tablet with a XGA (1024 x 768) display. The highlight of this tablet is the quad core 1.4GHz Samsung Exynos processor, which comes with Mali-400 graphics on board. Keeping all this running is a sufficiently large 5100 mAh battery. Priced at Php7,499, it is less than half the price of a Apple iPad mini, which in terms of screen size and aspect ratio. It is more expensive than a lot of its locally branded competitors, but it does justify the price with its Samsung Exynos credentials.

Disappointingly, the new tablet runs on older version of Android, and not the current Jelly Bean release. Cherry Mobile has issued Jelly Bean updates for several of its Ice Cream Sandwich devices, so hopefully it will update the Fusion Wave too.