Apple has updated its MacBook Air line-up. The changes were a bit less than expected.

1. Haswell - As expected the new MacBook Air models get upgraded to the fourth generation of Intel   Haswell Core processor.  This brings with it improved battery life performance and faster graphics performance. The new MacBook Air 11-inch will give you 9 hours of use, compared to 5 of the 201-0 to 2012 models. The 13-inch MacBook Air is now up to 12 hours, from 7 hours of previous models.

With the new Haswell processors comes the new and faster Intel HD Graphics 5000.

4. Dual mics. Apple has replaced the omnidirectional mic of the 2012 MacBook Air, with a dual mic arrangement in the 2013 MacBook Air. This will let the new MacBook Air cut down on background noise.

What is still the same?

a) Screen resolution. With all the new Full HD laptops devices coming out these days, I was thinking the new MacBook's might get the retina display. The new models still sport the same 1366 x 768 pixel resolution for the 11-inch model and 1440 x 900 resolution for the 13-inch model. Personally, I do not mind. The higher resolutions really do little to improve productivity, and many users do not even notice the difference.

b) Weight. Looking at Sony's new two pound 11-inch laptop, I thought the new MacBooks might she a bit of weight. It is not like the 2.4 pounds of the 11-inch model, and 3 pounds of the 13-inch model is heavy though.

c) Less Bezel. That MacBook Air, both 11-inch  and 13-inch models has a large bezel around the display, which is relatively larger for the 11-inch model. I was hoping, with Haswell, the two models could get a minor resize making them a bit smaller and lighter. 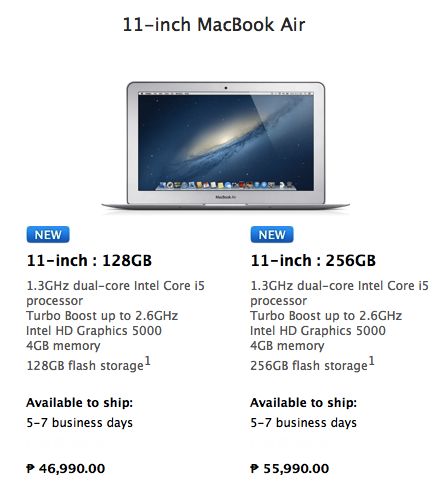 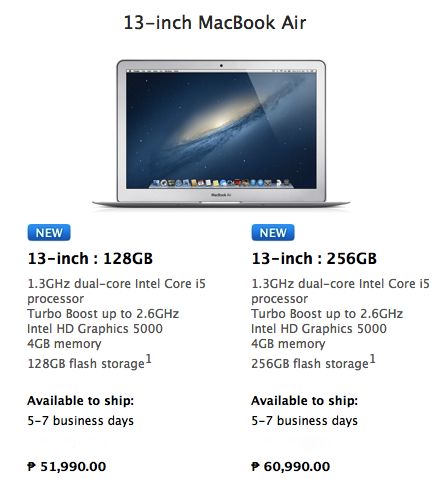 The entry level stays the same, at Php46,990, but the entry level model does come with double the storage. The 13-inch models are Php4,000 less than last years models.

All in all, nothing spectacular in the changes. Haswell and lower prices are really the stars of the show. But with the prices having gone down the way they have over the past the years, I am not complaining. My late 2010 model cost me a bit over 80K, When it comes time to replace, it looks like I will only have to spend 60K, Not bad in my book.

Email ThisBlogThis!Share to TwitterShare to FacebookShare to Pinterest
Labels: Ultrabooks