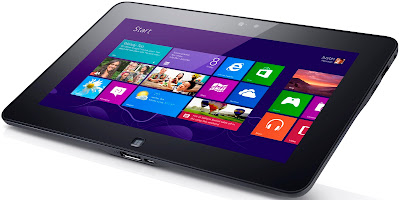 We have seen several Windows 8 tablets hit the market from Acer, Asus, HP, Microsoft and Samsung. These are Windows 8 tablets, which run the full desktop version of Windows 8 and are powered by Intel Processors. The Dell offering, is unremarkable in most respects with a 10.1-inch HD (1366  768) display, a Intel Atom Z2760 processor, 2 GB of RAM and a 64 GB SSD internal storage. Being part tablet it comes with front and rear cameras. Being part PC it comes with full sized USB ports, HDMI out and a SD Card slot.

Differentiating Dell Latitude 10 Tablet from other Windows 8 Tablets is a user replaceable battery, which is very rare in a tablet. The Dell Latitude 10 also stand out with its magnesium allow construction.