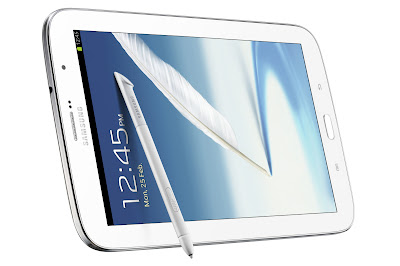 The specifications strike me as being transitional. Better than the Google Nexus 7 or the iPad mini, but  both of those models are likely to be updated in the next three to six months. An updated Nexus 7 tablet or iPad mini should exceed the specifications of the Galaxy Note 8.0, especially in terms of display resolution. A 1080p display, a quad core ARM Cortex A15 and LTE would what have made the Galaxy Note 8 a bleeding edge device.

The feature that will draw buyers toward the Galaxy Note 8.0 is the S-Pen or the fact that it really is an 8-inch GSM phone with voice and SMS functionality. But if the S-Pen is not a must have or you are buying it to use as a tablet and not as a all-in-one device, the Galaxy Note 8.0 becomes a less attractive proposition.

The Galaxy Note 8.0 looks expensive by comparison. It only costa about 6K more than a Nexus 7 3G and a few hundred more than the iPad mini, but that has LTE.

What makes a expensive proposition for most buyers is that the WiFi only version of the Galaxy Note 8.0 has not yet been released in the Philippines. If 3G is not something you want in a tablet, than the Nexus 7, iPad mini or one of the growing number of tablets pried at less than 10K would probably be more compelling options.

All-in-all, a Galaxy Note 8.0 costs what it costs. I has features which are not found in its competitors, so a direct price comparison is not possible. But I think Samsung launched the wrong model in the Philippines and the WiFi only N5110 is what would have been a better fit for the local market. If the N5110 takes a long time getting here, it may find itself competing against a Full HD Nexus tablet and a retina iPad mini.