The first part of this post is at this link.


Okay. Where were we. Android 4.2.2, by CyangenMod, on the HTC Desire HD. The nice thing about newer versions of Android is that the lock-screen is being given more functionality. When I wake my phone, I get to see my Agenda for the next few hours or days, depending on your settings. 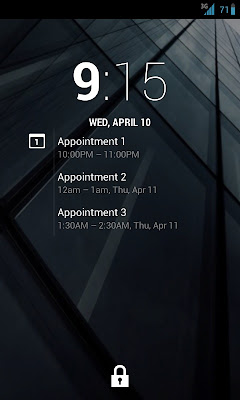 In the screenshot about, the quick view into the agenda is brought via CyanogenMod's cLock widget. I used to keep an Agenda widget on one home screen, but if I can have it one the lock-screen, so much the better.

Swipe the lock-screen left and it brings up the camera app. Swipe it right and you can access other widgets that you place on the lock-screen. Swipe up the bottom part of the screen to unclock, and you see something which should be pretty familiar looking to those who own Nexus phones, a pretty much Vanilla Android look. 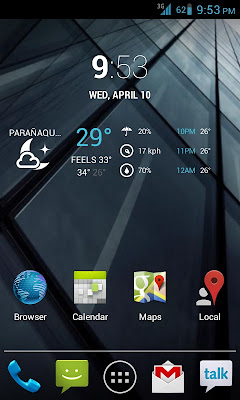 Here is what my default home screen looks like. Sometimes I wonder how important it is to have the weather on your home screen, but I got use to it with the HTC Sense Flip Clock Weather Widget. So I created same basic set-up on a with a Holo look using a widget from the 1Weather. It is add supported, but you can remove the adds for US$1.99, which is what I decided to do.

I do not use too many home screens. On HTC Sense I used five. With my agenda on the lock screen I just just use three on CyanogenMod 10.1. Swipe right an it is my "work" page. 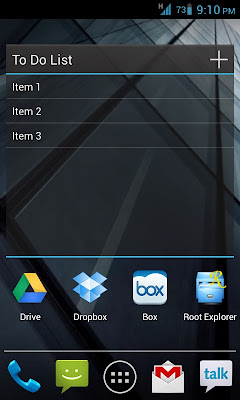 My to do list is displayed in the Task app by Team Tasks. I used Google Drive because I use Google Doc's in my office. Dropbox contains my work related files. I have not go around to migrating the files to Google Drive, though I keep telling myself I will. Box holds my personal files.

On the rightmost home screen I have my social page. 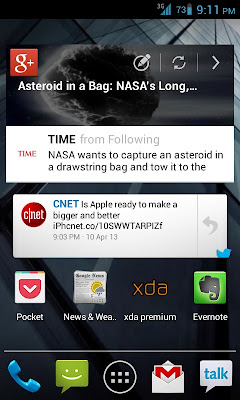 I use Twitter that way most people use RSS feeds. Google+ is where I go when I feel like doing some online socializing. That about it. I just use three home screens.

Performance of CyanogenMod 10.1 probably the fastest ROM I have ever had on this ROM. It looks like a 1 GHz processor and 768 MB of RAM is more than enough to run Android 4.2.2. Battery life on Android 4.2.2 seems to be rather good. Usually, when I use a "Vanilla" ROM, I get poorer battery life than a HTC Sense ROM. With CyanogenMod 10.1 is about the same as with Sense.

Bugs. The biggest issue is camera performance with this ROM is not as good as with the official ROM or a HTC Sense ROM. Occasionally, after taking a picture the screen is covered in a green tinge for a second, but it does not affect the picture quality. The only other small issue I have is wake time is not properly displayed in the battery history graph.

All-in-all, a small price to pay for running Google's latest and greatest. Not bad for a two and a half year old phone.