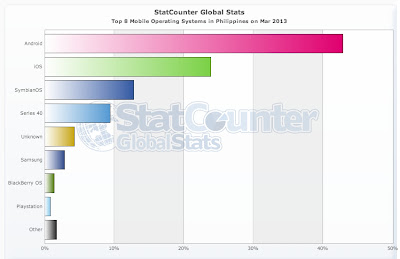 Based on webpage visits monitored by Statcounter, this is how the top mobile operating systems fared in terms of usage in the Philippines in March 2013.


March marks a milestone for iOS in the Philippines, as it passed the combined Symbian OS/Series 40 usage for the  first time.

To put these results into perspective, they do not represent mobile device sales, but online usage. Symbian OS and Series 40 phones accounted for over 40% of online usage in 2012, and the decline of Symbian usage corresponds to the gains made in Android and iOS usage.

BlackBerry usage has remained constant while Windows Phone usage has maintained its slow increase.
Posted by Unknown at 6:30 AM